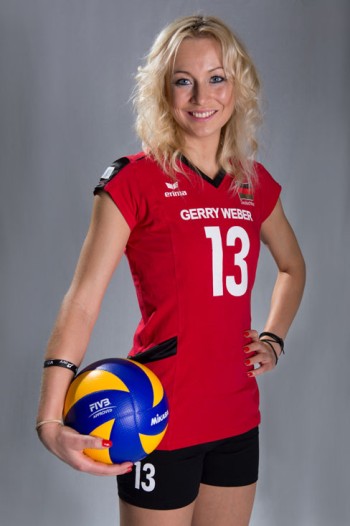 But, one jump has changed everything. Instead of joyful reunion with her friends, Saskia has ended in hospital, with torn ACL.

The season was over for her, that was clear from the beginning. However, two months later, mood of this great German player is much better. She is smiling and fighting for the return.

First of all, how do you feel now, regarding you are recovering from a serious injury?

“I don’t feel so bad, actually I try not to think about what happened and what it actually means, but just look forward. I guess other way, I would cry for the whole day. But there is no other solution than to keep the head up and fight every day.”

What is the first thing which crossed your mind when injury happened?

“At the very first moment, I didn’t feel pain. I knew before the jump that it would be dangerous for my ankle, but I jumped higher… So the first reaction was – Damn it, it’s the knee, knee is worse!”

How difficult is to watch your team, instead of being with them on the court?

“Actually I watched them live just one time. I go more often to my home team (Köpenicker SC Berlin), because I am at home now. But I watched our movie from the European Championship… That was so hard…”

When can we expect to see you back on the court?

“Hmmm…. Honestly, I am not thinking about that yet. I am still with the crutches, so my next goal is to walk without them, and hope that the cartilage will be OK.”

However, crutches will not stop Saskia to enjoy the New Year’s Eve. She will spend it in one of the most beautiful cities in Europe…

If you could wish something for the upcoming year, what would that be?

“That my knee would be 110% fine!!!! That is my biggest goal and wish, but also that I could be able to play on the World Championship!!”

Short New Year’s massage for your fans at the end…

“First of all, I really want to thank them all so much!!! It was unbelievable how much sympathy they showed for me and how many nice words and support I have received. So, really thanks to everybody, you have given me so much strength!!!” concluded Hippe.

CRO: Siget and Opatija crowned as a...